FOR RELEASE
March 7, 2019
TAGS: deceptive/misleading conduct Technology Bureau of Consumer Protection Consumer Protection Advertising and Marketing Online Advertising and Marketing Telemarketing
As part of a state, federal, and international crackdown on tech support scams, the Federal Trade Commission has temporarily shut down a Utah-based scheme that tricked consumers into believing their computers were infected with viruses in order to sell them costly computer repair services.

At the request of the FTC, a federal judge issued a temporary restraining order against Elite IT Partners, Inc. and its founder, President and CEO James Martinos. In a complaint, the FTC alleges that Martinos and his company used deceptive tactics to gain access to consumers’ computers and then sell costly and unnecessary computer repair and other services. The vast majority of the scheme’s victims were older consumers, according to the complaint.

“In 2018, older consumers reported losing money to tech support scams more frequently than younger adults,” said FTC Chairman Joe Simons, who discussed the issue at a news conference today at the Department of Justice. “The actions announced today show that we are committed to keeping older adults safe by shutting down these tech support scams and holding the operators accountable for their illegal actions.”

How to Avoid a Tech Support Scam
The first-person story about a retired business consultant’s tech support scam experience, what he did about it.
SharePlay Video

FTC Targets Utah-based Scam
The FTC alleges that Elite and Martinos used Internet ads targeting consumers looking for email password recovery help. Consumers who responded to Elite’s Internet ads were encouraged to provide their names, email addresses, and phone numbers. Once they reached consumers, Elite’s telemarketers often claimed to be associated with well-known companies like AOL or Yahoo, or falsely claimed that these companies are defunct and no longer provide customer service.

Elite’s telemarketers falsely told consumers that their problems most likely stemmed from a computer virus or infection in order to persuade consumers to provide access to their computers, the FTC alleges. Once they gained access, the telemarketers ran bogus “diagnostic” tests that tried to pass off normal computer files and functions as problematic or dangerous and made other deceptive claims.

The telemarketers often told consumers that these sham “diagnostic” tests showed their computers were in imminent danger in order to sell them unneeded computer repair and antivirus software and services, according to the FTC complaint. They used other scare tactics and misrepresentations to sell additional service plans costing as much as $39.99 per month. The FTC alleges that the company failed to adequately disclose that it required a one-year commitment and consumers would be automatically renewed for a second year if they did not cancel in writing at least 30 days before the end of the year. In addition, consumers who tried to cancel within the first year were charged a $150 fee not disclosed prior to purchase.

The FTC alleges that the defendants violated the FTC Act, Telemarketing Sales Rule, and Restore Online Shoppers’ Confidence Act; ROSCA prohibits the sale of goods or services on the Internet through negative option marketing without the proper disclosures.

NOTE: The Commission files a complaint when it has “reason to believe” that the law has been or is being violated and it appears to the Commission that a proceeding is in the public interest. The case will be decided by the court.

The FTC would like to thank Oath (now known as Verizon Media) and Microsoft for their assistance with this case.

The Federal Trade Commission works to promote competition, and protect and educate consumers. You can learn more about consumer topics and file a consumer complaint online or by calling 1-877-FTC-HELP (382-4357). Like the FTC on Facebook, follow us on Twitter, read our blogs, and subscribe to press releases for the latest FTC news and resources.

Similar to checkpost.space, pushmenews.com, lodder.club, and many others, deloplen.com is a rogue website designed to deliver dubious content and cause redirects. As with the aforementioned websites, users often visit deloplen.com inadvertently.

It appears like the law is finally catching up with mugshots operators. The infamous operators of Mugshot.com have been arrested and facing extradition to California The individual arrested are Sahar Sarid, Kishore Vidya Bhavnanie,Thomas Keesee and David Usdan.

According to their website, these guys now claim they are a new organization

MUGSHOTS.COM IS A NEWS ORGANIZATION. WE POST AND WRITE THOUSANDS OF NEWS STORIES A YEAR, MOST WANTED STORIES, EDITORIALS (UNDER CATEGORIES – BLOG) AND STORIES OF EXONERATIONS. OUR CONTENT REVOLVES AROUND CRIME, ARRESTS AND THE FIRST AMENDMENT. WE BELIEVE IN THE CONSTITUTION AND OUR FIRST AMENDMENT RIGHT TO PUBLISH UNPOPULAR SPEECH. OPEN RECORD LAWS WERE WRITTEN TO PROTECT THE PUBLIC; BY INFORMING THE PUBLIC OF ARRESTS AND TO HOLD LAW ENFORCEMENT ACCOUNTABLE FOR THE HUMANE TREATMENT OF ARRESTEES. MOST OF, IF NOT ALL “MUGSHOT LAWS” WERE CRAFTED TO PROTECT THE PUBLIC FROM FEES FOR REMOVAL OF ONLINE MUGSHOTS AND TO FURTHER PROTECT THE PRESS FROM THOSE VERY SAME “MUGSHOT LAWS”. TO BE CLEAR: WE DO NOT ACCEPT PAYMENT FOR REMOVAL OF ARREST INFORMATION AND/OR BOOKING PHOTOGRAPHS. WE HAVE OUTLINED UNDER OUR RECORD MAINTENANCE POLICY WHAT WE BELIEVE TO BE A FAIR PROCESS FOR ALL. SIMPLY PUT: IF THE COURT SAW FIT TO EXPUNGE YOUR RECORD, SO WILL WE, FREE OF CHARGE. ARRESTS DO NOT IMPLY GUILT AND CRIMINAL CHARGES ARE MERELY ACCUSATIONS, EVERYONE IS PRESUMED INNOCENT UNTIL PROVEN GUILTY IN A COURT OF LAW AND CONVICTED. FCRA DISCLAIMER: MUGSHOTS.COM DOES NOT PROVIDE CONSUMER REPORTS AND IS NOT A CONSUMER REPORTING AGENCY. OUR DATABASE CANNOT BE USED TO MAKE DECISIONS ABOUT CONSUMER CREDIT, EMPLOYMENT, INSURANCE, TENANT SCREENING, OR ANY OTHER PURPOSES THAT WOULD REQUIRE FCRA COMPLIANCE.

with making millions of illegal, unsolicited calls about educational programs to consumers who submitted their contact information to websites promising help with job searches, public benefits, and other unrelated programs.

“Telemarketers have a duty to ensure that they are not placing calls to people on the National Do-Not-Call Registry,” said Andrew Smith, Director of the Bureau of Consumer Protection, “And they cannot rely on affiliate websites that use fine print and other deceptive tactics to lure consumers.”

The job and benefits websites allegedly use different tactics, like small print, to hide their telemarketing purpose. For example, in the exhibit below, the web page states, “Jobs In Your Area” and “Thousands of Government Jobs In Your Area Are Looking to Hire Immediately,” and includes the misleading seals of several federal government agencies. At the bottom of the page is a block of small text that is illegible without substantial magnification. It states that clicking the “submit” button to request information about government jobs provides “consent” to receive telemarketing calls about various subjects unrelated to obtaining a government job. 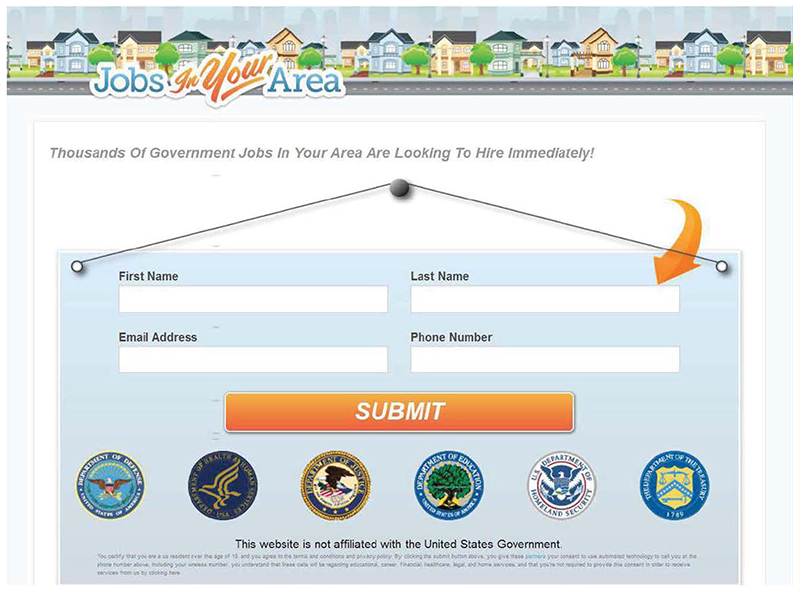 Similarly, the complaint alleges that the defendants have purchased leads from “FindFamilyResources.com,” a website offering to provide information about Temporary Assistance to Needy Families (TANF), welfare benefits, and unemployment insurance. The exhibit below shows a landing page that tells consumers they may “Learn More About Benefits Assistance” by submitting contact information in the boxes provided onscreen. The “yes” or “no” checkbox asking for consent to receive telemarketing calls is placed directly under an unrelated question about residency and age. 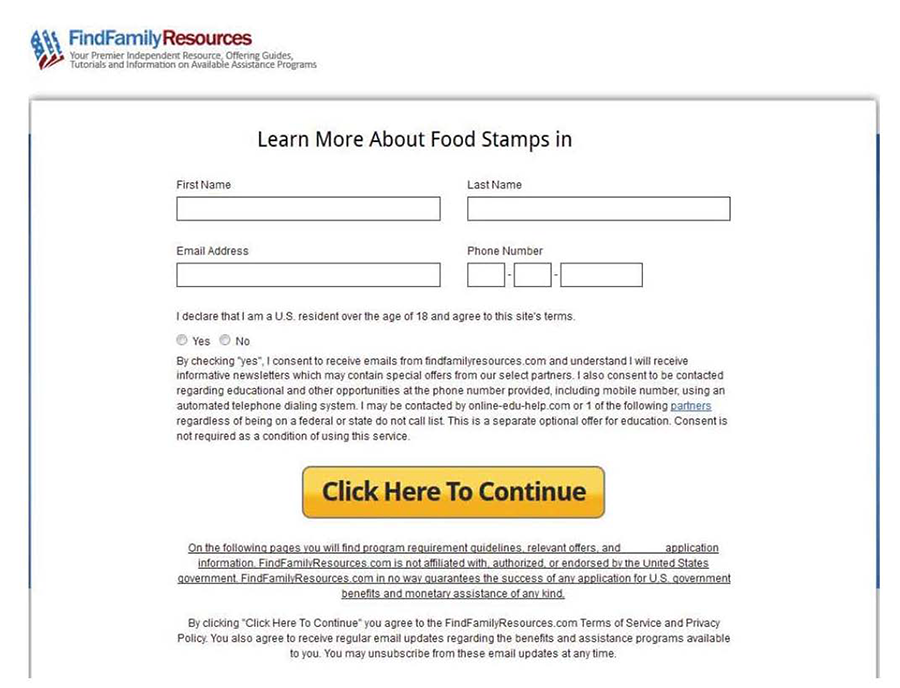 The Commission vote authorizing the staff to file the complaint was 5-0. The complaint was filed in the U.S. District Court for the Northern District of Illinois on March 29, 2019, after being referred back to the FTC by the U.S. Department of Justice.

NOTE: The Commission authorizes the filing of a complaint when it has “reason to believe” that the law has been or is being violated, and it appears to the Commission that a proceeding is in the public interest.

The Federal Trade Commission works to promote competition, and protect and educate consumers. You can learn more about consumer topics and file a consumer complaint online or by calling 1-877-FTC-HELP (382-4357). Like the FTC on Facebook, follow us on Twitter, read our blogs, and subscribe to press releases for the latest FTC news and resources.

In marketing, lead generation (/ˈliːd/) is the initiation of consumer interest or enquiry

into products or services of a business. The FTC say there are unscrupulous lead generator operators online.

You’ve probably shared your contact information online to, say, get details about a job opening. Usually, that’s fine. But sometimes you might be looking for one thing and wind up getting something else – like calls about stuff you never asked for or wanted.

The FTC sued Day Pacer, LLC for allegedly making unwanted calls as part of a scheme that used just this kind of bait-and-switch. According to the lawsuit, Day Pacer is a lead generator that got its leads from websites with convincing graphics and language to make people think they were in the right place to get what they needed. People went to these websites and shared their phone numbers to get help applying for jobs, health insurance, unemployment benefits and other assistance. But that’s not what they got. Instead, people got unwanted phone calls from Day Pacer with sales pitches to enroll in post-secondary and vocational schools operated by its clients. The company disturbed millions of people with these calls – even though their numbers were on the National Do Not Call Registry.

When you search online for jobs, benefits, or government assistance, you want to be sure you wind up where you need to be. So, once you have your search results:

And if you know someone who’s gone through this kind of bait-and-switch, report it to the FTC.